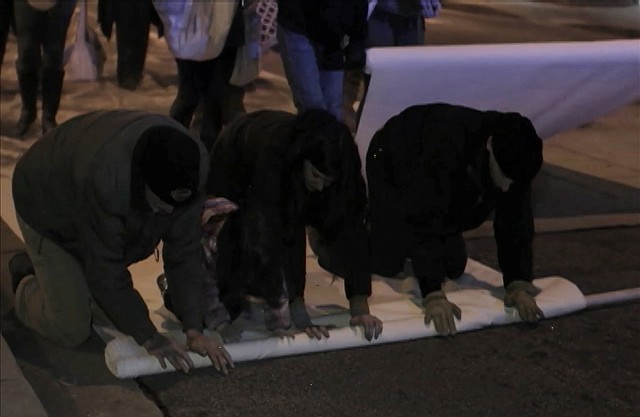 "Crossings" was a community art performance held in front of the South Carolina state capitol on the eve of the one hundred and fifty year anniversary of the historic burning of Columbia, marking the approaching end of the Civil War.

This event brought together participants of diverse racial and social backgrounds in an effort to openly acknowledge and address the historical trauma of the South still embedded and active within the cultural framework.

Group meetings prior to the performance were held at the Big Apple, a former synagogue turned African American dance club in the early 20th century. These meetings served to initiate dialogue and break down uncomfortable social barriers through storytelling and play influenced by Augusto Boal's Theater of the Oppressed.

The materials used in this performance, one ton of cotton canvas, ash and railroad stones, played a significant roll in the historical narrative of the South. The cotton canvas was donated by Mount Vernon Mills, a textile manufacturing company who supplied both Confederate and Union soldiers with cotton canvas during the Civil War. The ash was a result of the remains of two burned down historic homes and the stones, the remnants of a former railroad track used to transport cotton from a local plantation.