"A Sounding" was a site specific and temporal installation installed on the former site of St. Ann's Church in Griffintown, Montreal, Canada. Griffintown was the location of Montreal's Irish immigrant community.

This project was realized as a series of drawings reimagining St. Ann's church from the perspective of collective memories provided by former Griffintown residents.

The historic site of the church is a strong signifier of Griffintown's past and present landscape. In its former life, St. Ann's represented the heart of the Irish working class community in Griffintown. With it's politically tinged demolition in the 1970s, the remaining ruins have become a symbol for the cultural, social, political, and economic changes within the neighborhood.

On the former site of the church, the drawings were enlarged and printed onto 8’ x 17’ Tyvec panels and hung from the trees within the foundational lines of the church's center nave. The images themselves in continuous fragmentation, shifted in clarity as viewers moved along the original path of the nave. 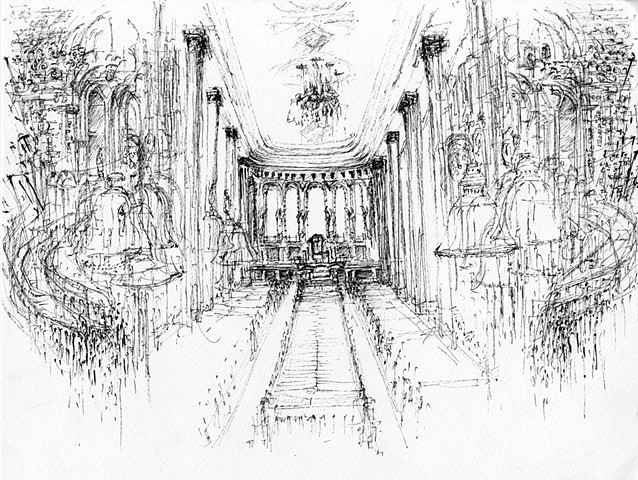 A Sounding
Pen on paper
< previous next >